Walking through the historical street of the city centre. 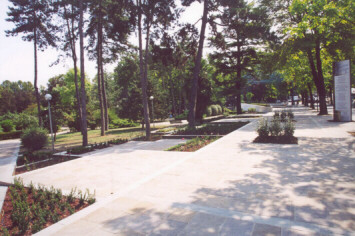 At number 11 of via Romagnosi is located the birthplace of the philosopher and lawyer Gian Domenico Romagnosi, as we are reminded by the plaque on the facade of the building. It dates back to the 16th century but after the renovation at the beginning of the 20th century it was enriched with pretty liberty-style elements.

Continuing the path and crossing Largo Roma you’ll arrive in viale Romagnosi, an elegant boulevard in the city centre for walking and shopping. Shaded by some chestnut trees and decorated with flowerbeds the exclusive boulvard flanks the Corazza Park and has been recently restored and enriched with an high and modern metal Gazebo.

From here the boulvard enlarges and become piazza del Popolo, where stands a modern fountain now transformed in a flowery flowerbed.
The street go ahead uphill until the flowerbed with the monument of Romagnosi by Cristoforo Marzaroli. At its side rise the monumental Congress Palace, ex Grand Hotel des Thermes. Viale Romagnosi ends after few steps with the wonderful Berardinelli staircase.